People travel all over the world to support their sports team. There are few other things in the world that can tempt a person to travel to Krasnodar, south Russia on a Thursday evening. Despite the 2,000 mile trip, 500 Everton fans were not deterred. Sport makes people traverse great lengths on a regular occurrence and, while a trip to Russia may sound good, it is hardly the best value for money.

So what are the definitive sporting cities of the world?

England’s capital has overtaken Melbourne, more on them later, as the sporting capital of the world. The legacy of the 2012 Olympics still very much hangs in the London air, and if you take a quick foray to east London you can see the iconic Olympic resort in all its glory. However, the Olympics were just a microcosm of the fantastic sport that London has to offer.

Football has always been the biggest sport in Britain. Last season, Premier League grounds had an average attendance of 36,670, making them second only to the German Bundesliga in attendance figures. When it comes to London’s side’s you have Arsenal, Chelsea, Tottenham, West Ham, Crystal Palace and Queens Park Rangers plying their trade in the top flight. Arsenal, who until last season’s FA Cup win had been perennial failures, play at the fantastic 60,000+ capacity Emirates Stadium, which is just as pretty as the Gunners’ passing game.

Russian billionaire Roman Abramovich revolutionised the Premier League when he bought Chelsea in 2003. The untold millions that he has pumped into the club has changed them from a top-six outfit into annual title contenders and winners. Their stadium, Stamford Bridge, is a lot more intimate than the Emirates but due to rising ticket prices the atmosphere is slightly lacking, something that maverick manager Jose Mourinho spoke out about a couple of months ago. But the football is impeccable and, with rumours circulating that Lionel Messi may be the next man to join the club, it is only going to get better. However, if you want to get a true feel of London’s football terrace scene then a trip to Upton Park is ideal. The West Ham fanbase are some of the most vociferous in all of England and the thunderous din that they create in their home ground borders on lunacy. What’s more, this season West Ham are playing football that matches their superb support.

Cricket has also found a home in the heart of London. Lord’s Cricket Ground houses Middlesex and is the spiritual home of the England cricket team. This historic venue is often referenced as the “Home of Cricket”, and, with it being open since 1814, is the oldest serving sports museum on the planet. 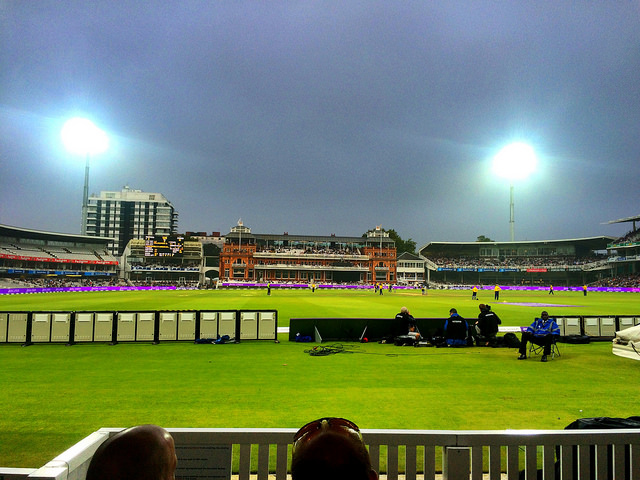 If the cordial atmosphere of Lord’s is not for your liking then a short trip across town is the equally famous Kennington Oval. A quick piece of trivia, the Oval was the location of the first FA Cup final, the first England international football fixture and the first home game of the England rugby union side. Both these cricket grounds are known around the world and serve as pillars of cricket’s lasting legacy. The only problem with these two grounds right now is that the players that try and defend their integrity are not that good. England, who got decimated in the last Ashes, are already outsiders with betfair in the Ashes betting – if Australia whitewash England again this summer then there will be an ominous cloud looming over these cathedrals of cricket.

There has never been a better year for rugby fans to visit London. This year sees the rugby World Cup commence in Britain in September. With Twickenham – the home of the national rugby union side – Wembley – the home of the national football side – and the Olympic Stadium all serving as venues, there are 17 matches being played in the capital. Away from the international game you have various top-flight clubs like Saracens and London Wasps who are competing most weekends.

Any tennis aficionado will always have Wimbledon entered into their calendar. The renowned grass court tennis tournament is the largest and grandest of all tournaments of the respective sport. Spending an afternoon gorging on strawberries and cream, drinking copious amounts of champagne and watching the best tennis players ply their trade is certainly one of the better ways to spend your summer afternoons.

London, which has always had a rich history in regards to betting, is also in close proximity to the legendary Ascot and Epsom racecourses whilst it also home to the Wimbledon dog track.

As aforementioned, Melbourne was beaten into second place by London in regards to the sporting capital of the world. Although it is no longer the undisputed don of sports it is by no means a slouch. There is no other city in the southern hemisphere that can quite compare to Melbourne.

It is impossible to go to Melbourne and not go to the Melbourne Cricket Ground (MCG). This 100,000+ capacity stadium means more to the natives than the local seat of government. Not only is it a landmark of the city, but it is a national institute that any Australian sports star wants to play at during their career. The stadium is the venue for the Grand Final of the Australian Football League – Aussie Rules, not to be confused with European football – a spectacle that attracts nearly 100,000 people on a yearly basis.

The most famous test match in cricket, the Boxing Day Ashes Test between England and Australia, is held at the MCG whenever the series is Down Under. The stadium also hosts fixtures from both codes of rugby and international football matches. With all this sport going on, it is little wonder that the stadium has earned the moniker of the “Spiritual Home of Australian Sport”.

Like London, Melbourne is one of the cities that the four tennis Grand Slam tournaments are staged. The Australian Open – the first Grand Slam tournament of the calendar with a start date of January – has been held at Melbourne Park since 1988. Last year’s competition saw 643,280 fans flock through the gates. Its support is unwavering and is only going to get larger as the stadium increases in capacity. 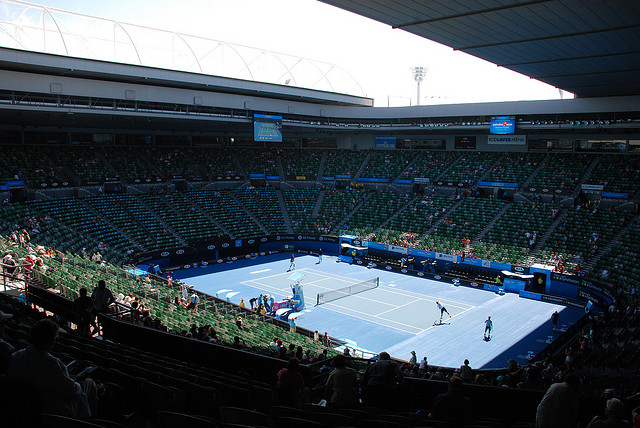 The Australian Open is usually the tournament when most of the upsets occur as many of the top players fail to shrug off the winter rust. For excitement like no other, a unique support base that is alien to most tennis courts and sublime sunshine, Melbourne Park is the place where you need to be.

Formula One rarely makes it into the urban sprawls of cities, mainly due to the fact that there isn’t enough space to even contemplate making a track. Melbourne, however, is quite different. Just a few kilometres south of the city is the Melbourne Grand Prix Circuit, the course that is usually used as the curtain raiser for the Formula One season. Much like the tennis, the Australian Grand Prix, as it is correctly known, acts as a barometer for future success for the likes of reigning champion Lewis Hamilton and others.

It is the first race of the season so you get to see which cars have the pace and which cars don’t. Last season we saw Nico Rosberg win and strike the first blow in his epic title feud with team-mate Hamilton, although it was the Brit who had the final laugh.

Melbourne is alive with sport. You can stop nearly anyone on the street and start talking sport. Be warned, if you are British expect a torrent of high-end banter from the Melbourne residents, who embark on a friendly but competitive rivalry with their British counterparts.

A vast sum of people consider Boston as the 21st century Athens. With Harvard University and the Massachusetts Institute of Technology (MIT) both being ranked in the top five universities in the world it is easily understandable why Boston has garnered such a nickname. And while Bostonians are proud of their educational institutions their admiration for them pales in comparison to their sporting franchises. Boston and sport are synonymous.

Besides the New York Yankees, the Boston Red Sox are the most well-known baseball side in the world. The team achieved great notoriety during the 20th Century as they went searching for a World Series win. After winning five World Series – the most of any side at the time – the Red Sox sold baseball-great Babe Ruth to the New York Yankees, who at the time (1920) had yet to win a World Series. What transpired is now called the Curse of the Bambino. The Yankees went on to have great success whilst the Red Sox would have to wait 86 years for their next World Series triumph. Thankfully, Fenway Park is now once again seeing its fair share of glory, and it is only right to. The 103-year-old stadium, the oldest ballpark in America, is a sporting masterpiece. The fans are close to the action and the sound that resonates around the rafters really is phenomenal. 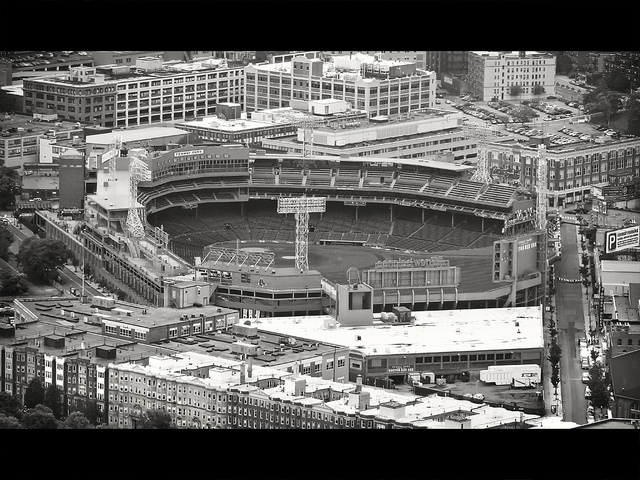 Baseball may be the favoured game of choice for Bostonians but that does not mean they are any less fanatical about the other sporting sides that the city possesses. The Boston Celtics are the most successful basketball side in all of America. With greats like Bill Russell, the original “Big Three”:Larry Bird, Kevin McHale and Robert Parish, and modern day stars like Kevin Garnett it comes as little surprise that the basketball outfit has managed to achieve 17 NBA Championships. Their TD Garden’s court can house 18,624 hungry spectators, who, although not right now, often leave mesmerised.

The sporting prowess of Boston sides must be the ire of so many Americans. In the NFL, America’s most popular sport, you have the New England Patriots. The three-time Super Bowl winners, and current favourites for the 2015 final, play at the Gillette Stadium, in Foxborough. You need a lot of available room to have an NFL stadium, and this is something that the Boston area did not have, so instead the franchise is located 21 miles southwest of downtown Boston. Half an hour, comfortably, is enough to make it part of the city’s sporting institutes. 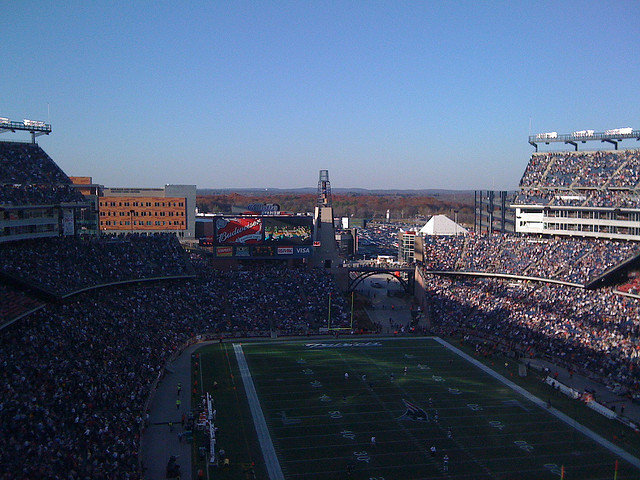 Finally, and by no means least, the Boston Bruins. The ice hockey side were one of the founding fathers of the NHL and they also play their games at the TD Gardens. Now watching ice hockey is like watching no other sport. For one, the sheer break-neck speed that the game is played at is simply staggering, while the blood lustful and rowdy crowd really are something else. If you are a fan of people roughing one another up and slamming them into glass, which in all fairness does sound pretty entertaining, then an evening at the ice hockey is a no brainer.

People reading from other cities like Chicago and Rio de Janeiro will not be too happy with the three choices above. However, when it comes to overall success across the board then they really don’t have a leg to stand on. If you are one of those people that are willing to travel X amount of miles to follow your team then you should certainly consider travelling the world and seeing some of the world’s other sporting delights.