We all love to have a night out now and then. But if you have too many of them you can end up quickly spending a lot of cash! But you’ll have noticed this, right? After all, a couple of beers in the pub can cost about the same as a basket-load from a cheap supermarket these days. OK, you may not be able to see straight for three days but, hey, what’s your objective here!?

And for once, the Chancellor actually gave us something to smile about in the recent budget. The cynics amongst you may think this was brazen electioneering to which we must reply, “how VERY dare you!?” 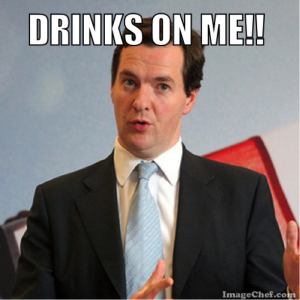 Anyway, forget the election for now. The really good news about falling beer prices in this month’s UK budget means that a few rounds down the pub will not be as expensive as they were pre-budget. But the cost of drinking while you’re out still far exceeds the cost of drinking alcohol at home.

And the potential for public humiliation and generally making a fool of yourself is also far less. And this maters in an age when your drunken visage can be up on Facebook while you’re still in the pub / club / kebab shop / back of the taxi etc.

All in all, it still makes a lot of sense to stay in. George Osborne isn’t quite THAT much fun just yet. Not only do you end up saving a lot of cash by socialising at home, but it can also be just as much fun. In fact, for many people, it’s more fun.

A night in at home with friends is always more intimate than getting together in a public place. There’s less pressure to worry about what you’re wearing and there’s no need to feel inhibited as you might do in a bar or restaurant. You can make as much noise as you like and there’s no danger of unwanted interruptions from other people who you might run into in a public place. Also, there’s no need to think about transport there and back. If people want to drink, they can stay over and drive home in the morning.

The trouble is, they stay whether you want them to or not sometimes!

The key to having fun at home on a night in is to decide what you are going to do beforehand. Otherwise there’s a danger that you’ll all just end up watching EastEnders or X Factor and not actually socialising with each other.

One idea is to have a games night. You might take the traditional board games route, and shake the dust off the Monopoly or Trivial Pursuit. Or maybe you’ll all have a few rounds of online bingo, where you login to the same bingo site and play the same games. Playing bingo online doesn’t require much player input. You just choose which game and how many tickets you want to play. The software does the hard work of marking the numbers off for you. You and your mates can just enjoy seeing how well you’re doing and who’s closest to a win.

If you’re not the game-playing types, then why not make food the focus? Even if you’re not the world’s best cook, you can improve. And who better to try your cooking out on than good friends who will give you an honest opinion? Cooking a meal at home will work out to be far cheaper than eating out, and as you hone your skills, you may discover that you can do a better job than most catering establishments that are serving a large number of people. If you can’t handle the idea of doing all the cooking, divide and conquer and get your friends to bring a dish with them.

However you plan a night in, you’ll have a great time as long as you have friends to share it with. You’ll also know that you’re spending a fraction of the amount you’d spend on a night out and that can only be good news! George will have to go a lot further yet before he changes that for us all … unfortunately!